For 50 years, the elite boarding school Charles R. Drew Prep has stood by its traditions and prepared young black men to lead. But times and finances have changed, and the pressure on Drew’s legendary gospel choir is high. So when Pharus, an ambitious and talented student, is told to ignore a gay slur to take his place as the choir’s leader, he has to decide who he is and what he’s willing to fight for. A music-filled story of masculinity, tradition, coming of age, and speaking your truth from the writer of The Brother/Sister Trilogy (The Brothers Size, In the Red and Brown Water, Marcus; Or the Secret of Sweet).

Runtime: This performance will run approximately 1 hour and 40 minutes with no intermission.

Choir Boy is funded in part by the D. C. Commission on the Arts & Humanities, an agency supported in part by the National Endowment for the Arts. Studio Theatre is also grateful to the Paul M. Angell Family Foundation for its generous support of this production.

Studio Theatre thanks the National Endowment for the Arts, John Horman, and Toni Ritzenberg for their support of Choir Boy. 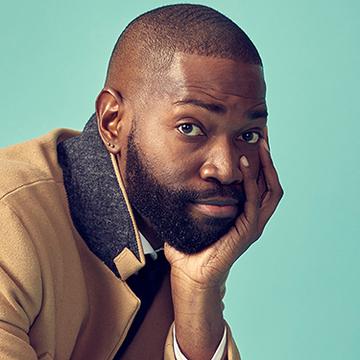 Tarell Alvin McCraney is best known for his acclaimed trilogy, The Brother/Sister Plays: The Brothers Size, In the Red and Brown Water, and Marcus; or the Secret of Sweet. They have been performed at McCarter Theater in Princeton, The Public Theater in New York, Steppenwolf Theatre in Chicago, at a trio of theaters in the Bay Area: Marin Theatre Company, ACT, and Magic Theatre, as well as the Young Vic in London (Olivier Award nomination) and around the world. Other plays include The Breach (Southern Rep, Seattle Rep), Wig Out! (Sundance Theatre Institute, Royal Court, and Vineyard Theatre - GLAAD Award for Outstanding Play), and American Trade (Royal Shakespeare Company/Hampstead Theatre). Steppenwolf Theatre Company, where he is an ensemble member, will produce the world premiere of his commissioned play, Head of Passes in the spring of 2013.

Tarell was the Royal Shakespeare Company’s International Playwright in Residence in 2009-2011, where he co-edited and directed the Young People's Shakespeare production of Hamlet which toured throughout the UK and was presented at the Park Avenue Armory in New York. He is the recipient of the prestigious Whiting Award and Steinberg Playwright Award, as well as London's Evening Standard Award for Most Promising Playwright, the inaugural New York Times Outstanding Playwright Award, and the inaugural Paula Vogel Playwriting Award.

He is a graduate from the New World School of the Arts High School, the Theatre School at DePaul University in Chicago, and the Yale School of Drama. He is a resident playwright at New Dramatists and a member of Teo Castellanos/D-Projects in Miami. 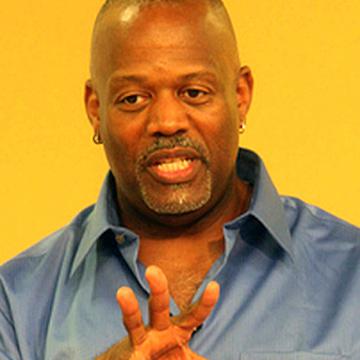 Kent Gash returns to Studio for Wig Out! after directing Tarell Alvin McCraney’s Choir Boy (2015) at Studio Theatre and as a result of that production has been the Doris Duke Charitable Foundation Artist in Residence for 2016-17. Mr. Gash is the founding director of the NYU Tisch New Studio on Broadway. New York credits include the World Premiere production of Barbecue at The Public Theater, Broke-Ology at the Juilliard School, the Off Broadway premiere of Miss Ever’s Boys for the Melting Pot Theatre Company, the world premiere musical Call the Children Home for Primary Stages, the York Theatre concert presentation of Duke Ellington’s Beggar’s Holiday, and Samm-Art William’s Home. Future projects include Gem of the Ocean at South Coast Rep and The Wiz at Ford’s Theatre. Mr. Gash has numerous regional credits across the country including Signature Theatre, Oregon Shakespeare Festival, Marin Theatre Company, Cincinnati Playhouse, Cleveland Play House, Denver Center Theatre Company, McCarter Theater, Sundance Theatre Institute, Intiman Theatre, Shakespeare Santa Cruz, The Kennedy Center, Arizona Theatre Company, San Jose Rep, Trinity Rep, Hartford Stage Company, and Maltz-Jupiter Theatre. Mr. Gash formerly served as the Associate Artistic Director for the Alabama Shakespeare Festival, and as the Associate Artistic Director of the Alliance Theatre. Mr. Gash holds a BFA in acting from Carnegie Mellon University and an MFA in directing from UCLA. 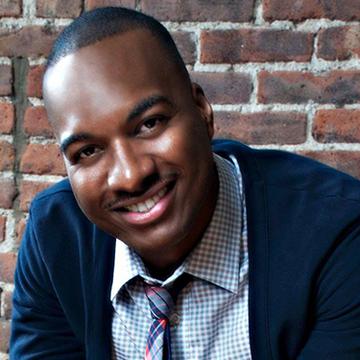 Darius Smith is pleased to return to Studio Theatre, where he served as music director on Carrie the Musical. His New York theatre credits include Bob Marley’s Three Little Birds Off Broadway and his original song cycle Songs in the Key of Chocolate at 54 Below. His local work as a music director includes productions of Disney’s The Little Mermaid and Once on This Island at Olney Theatre Center, Dreamgirls at Signature Theatre as Associate Music Director, and Glimpses of the Moon at MetroStage, among others. As a composer/lyricist, he has provided music and lyrics for The Snowy Day at Adventure Theatre MTC (Helen Hayes Award nomination, Outstanding TYA Production) and U.G.L.Y. at The Kennedy Center.  His upcoming projects include Petit Rouge at Adventure Theatre MTC and Soon at Signature Theatre. 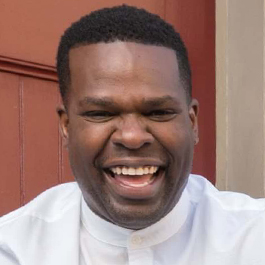 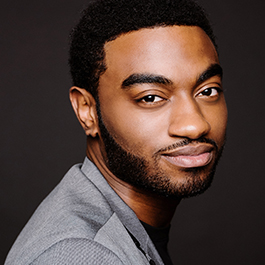 Jelani Alladin makes his Studio Theatre debut.  His New York credits include Madame Infamy as a part of the New York Musical Theatre Festival and Macbeth at the Park Avenue Armory (Rob Ashford and Kenneth Branagh, dir.). Other roles include Phil D’Armano in The Wild Party, Coalhouse Walker Jr. in Ragtime, Mr. Franklin/Joop/Venus in Passing Strange, and the title role in Julius Caesar at NYU. Mr. Alladin is a recent graduate from NYU’s Tisch School of the Arts’ New Studio on Broadway. 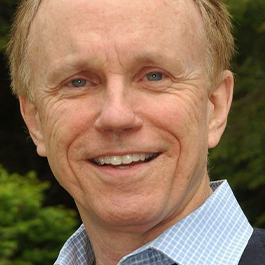 Alan Wade previously appeared at Studio Theatre as Michael in Someone Who’ll Watch Over Me and The Astronaut in Imagine Drowning. He appeared last summer as Gonzalo in The Tempest at Olney Theatre where he has appeared in and directed numerous productions over the last three decades. He has also appeared locally at Arena Stage, Metro Stage, Washington Stage Guild, Horizons Theatre, and the Potomac Theatre Project, and Off Broadway at Atlantic Theater Company.  His film and television credits include The Pelican Brief, Major League II, Homicide, and A Man Called Hawk. A professor at The George Washington University for almost four decades, Mr. Wade now serves as Interim Director of the University’s Corcoran School of the Arts and Design. 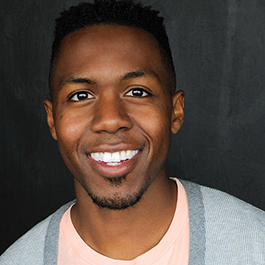 Eric Lockley makes his Studio Theatre debut. Recent stage credits include How We Got On at Cleveland Play House and the world premiere of Black Odyssey at Denver Center for the Performing Arts. Mr. Lockley has also written, performed, and produced his own solo shows, including Asking For More, a show that encourages diet and fitness education in urban communities, which he most recently performed at the Apollo Theater in Harlem. Mr. Lockley is the recipient of a Theater Hall of Fame Award and an OBIE Award. His work in film and television has been showcased on HBO, MTV, and BET. He can be seen in the upcoming short film Knockout Game. Mr. Lockley is a Baltimore native and graduate of NYU’s Tisch School of the Arts. 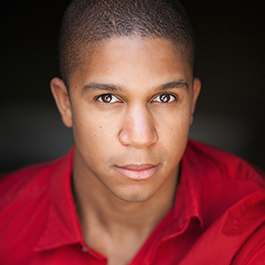 Jaysen Wright returns to Studio for Wig Out! after performances in Choir Boy and The Rocky Horror Show. Selected credits include Smart People at Arena Stage; Choir Boy at Marin Theater Company; A Christmas Carol at Ford’s Theater; The Miraculous Journey of Edward Tulane and Looking for Roberto Clemente at Imagination Stage; Sons of the Prophet at Theater J; Now Comes the Night and Take Me Out at 1st Stage; and Measure for Measure, Wallenstein, and Coriolanus at Shakespeare Theatre Company. He recently had a supporting role in the independent feature film Saints Rest. Mr. Wright holds an MFA in acting from Indiana University. 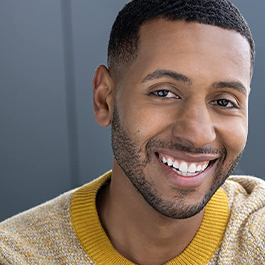 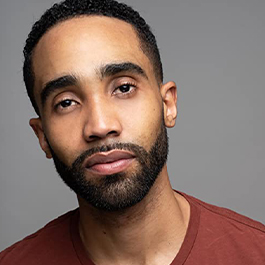 Jonathan Burke is pleased to make his Studio Theatre debut. A Baltimore native and graduate of the Baltimore School for the Arts, Mr. Burke was most recently seen in the national tour of Joseph and the Amazing Technicolor Dreamcoat.  His other national tours include Mary Poppins, A Christmas Story: The Musical, and Cats.  Mr. Burke was seen Off Broadway in the world premiere of Langston in Harlem as well as in Jazz A La Carte at the Apollo Theatre with Savion Glover.  Regionally, his work includes Amazing Grace at Goodspeed Opera House, Hairspray at Merry-Go-Round Playhouse, Rent at the Hangar Theatre, Goddess at the Eugene O’Neill Theatre Center, Dreamgirls at Portland Center Stage, and The Wiz at Center Stage. He has been seen on television in the TV Land Awards, on video in The Broadway Warm-Up and in commercials for Daffy’s Dance and Joe’s Crab Shack.  Mr. Burke holds a BFA from Ithaca College.

Kenny Neal returns to Studio for Straight White Men after having designed Jumpers for Goalposts and Choir Boy. Other credits include The Gulf for Signature Theatre; Floyd Collins, Old Wicked Songs (2016 Helen Hayes nomination for Sound Design), and Bat Boy for 1st Stage; Cancun for GALA Hispanic Theatre; Caesar & DADA for WSC Avant Bard; Over Her Dead Body, The Last Burlesque, and Bondage for Pinky Swear Productions; Cherry Smoke for Round House Theatre; and Happiness (and Other Reasons To Die) for The Welders. He regularly designs for Adventure Theatre MTC, The Smithsonian’s Discovery Theater, Signature in the Schools, Georgetown University, and American University.

John Keith Hall's DC credits include many productions at Studio Theatre including Bad Jews, Choir Boy, Water by the Spoonful, Tribes, Torch Song Trilogy, 4000 Miles, Sucker Punch, In The Red And Brown Water, The History Boys, Adding Machine: A Musical, and The Road To Mecca; Hir, The Nether, and An Octoroon at Woolly Mammoth Theatre Company; Soon, SCKBSTD, and West Side Story at Signature Theatre; Sweeney Todd, Mary Poppins, and The Producers at Olney Theatre Center.  Regional credits include several seasons as a Resident Stage Manager at The Barter Theatre in Virginia where he supervised over 40 productions, Shadowland Stages in New York, and Virginia Musical Theatre in Virginia Beach. A graduate of Virginia’s Longwood University, Mr. Hall is a proud member of the Actors’ Equity Association.

❝
POWERFUL! This Choir Boy sings a stirring tune.
The Washington Post
❝
This daring play should be required theatergoing for anyone who believes in the transformative power of the stage.
DC Theatre Scene
❝
The rich language and music, coupled with emotionally-charged acting, and a compelling story make Choir Boy one to see.
Broadway World 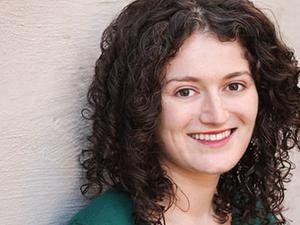 A Note from the Dramaturg, Lauren Halvorsen 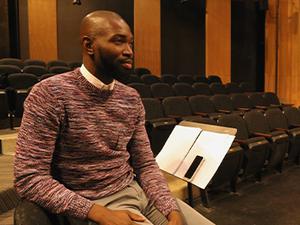 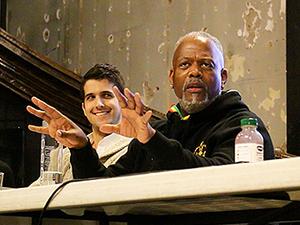 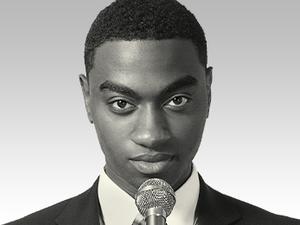 Hear the Music of Choir Boy 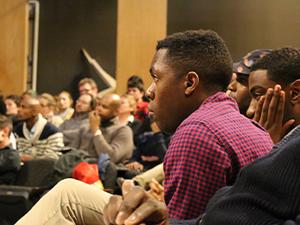 Anatomy of a Choir 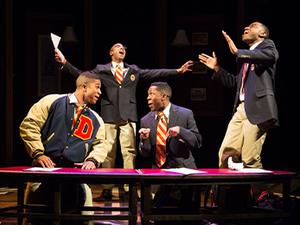